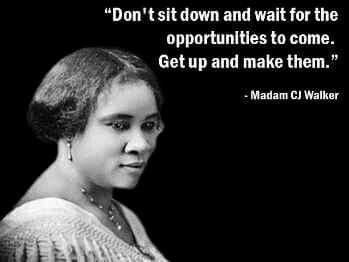 In February, Hays Academy of Hair Design would like to take the opportunity to celebrate Black History Month. As a school, we celebrate and commemorate the pioneers who have worked to bring equality for all Black Americans!

In the beauty industry, one of the most vibrant and successful people throughout history is Madam C.J. Walker. Born in 1867 in Louisiana, she was born the first free child of her family after the Emancipation Proclamation. Her humble beginnings did not hold her back as she became the first female self-made millionaire in America. Madam Walker became a cosmetology superstar as she recognized that all of the beauty products of the time were made for white woman’s hair, and the black community were left without any store-bought options.

Seeing this as an issue, she opened the Madam C.J. Walker Manufacturing Company. Her two most impactful products included her own shampoo and a scalp ointment to keep people from having common scalp diseases. People said that she was the most down-to-earth millionaire and business owner. She would talk with people to better understand their needs, made deals with major retailers of the time to carry her product and did her own research into what would benefit her consumers the most. Remarkably, she did this in a time were black women (or any woman for that matter) could vote. In addition to manufacturing her hair products, she was also an avid volunteer and advocate for the YMCA, NAACP, and those in need such as widows, children and the elderly.

Truly, Madam Walker made a terrific impact in cosmetology and in her community. How much better off would we be if we had more people like Madam C.J. Walker?