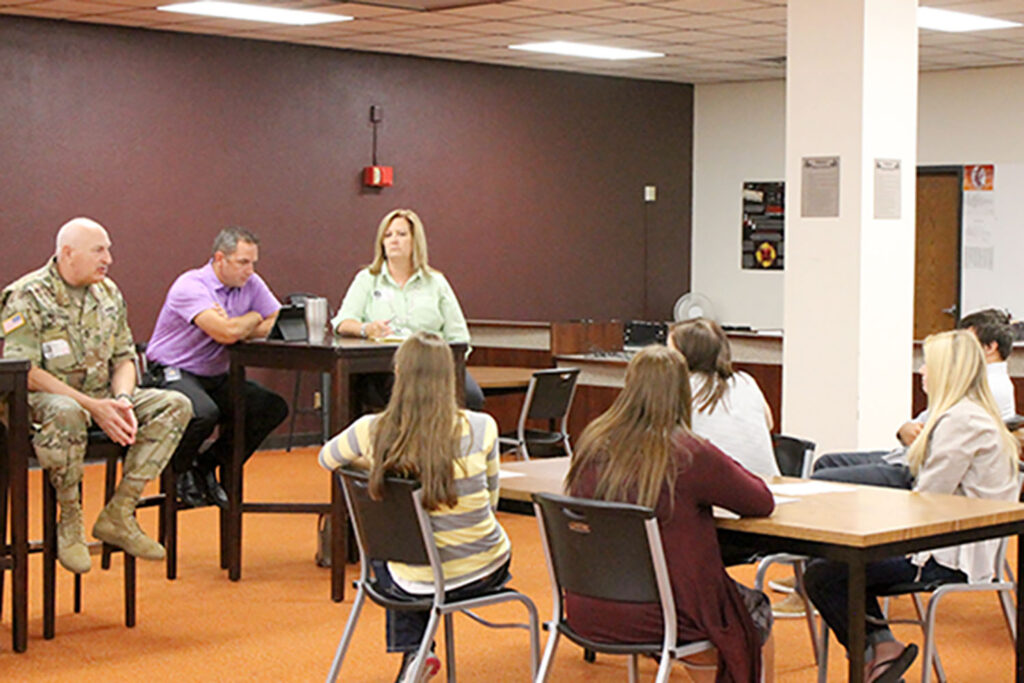 When you think of a job fair, people generally think of a set-up similar to speed dating. The job fair at Hays High School did not resemble this image, but instead was a three-person panel from different professions who shared their ideas of how applicants should approach an interview.

The panel consisted of Len Melvin from the Hays Academy of Hair Design, Sergeant First Class (SFC) Joel Millerman, and Debbie Foster from Golden Plains Credit Union. They all had similar suggestions for how an employee should prepare and act for an interview, and how they should behave during the actual job.

“Resumes are a very important part in the interview process, if not the most important,” Melvin said. “It is the first thing that employers see.”
Melvin had many tips for preparing yourself for an interview. He said that an applicant would be more likely to be hired if they came in to the interview already knowing about the job.

“If someone walks in and can tell us our history since 2003, their status just rose in my mind,” Melvin said.

Each person on the panel made good points, although they had to rush slightly to meet the allotted time. The entire group agreed that there was no harm in dressing up more.

“You will rarely ever get docked points for wearing a shirt and tie,” Melvin said.

Debbie Foster agreed with his idea. “You should always dress like you already have the job,” Foster said. “Make sure to dress appropriately for the job you are applying for. Make sure your clothes have no wrinkles. If you don’t know how to press a shirt, it’s time for you to learn.”

Not only did the panel suggest that you dress well, they suggested that interviewees carry themselves well.

“If you can’t make eye contact during your interview, how are we supposed to know that you have that quality where you can converse well with customers?” Foster said.

“And if you cannot directly look at someone, it causes trust issues,” Joel Millerman said. “When you avoid meeting someone’s eye, it makes them assume that you are hiding something. Then they start looking harder into your background checks, your social media, anything that you could be hiding from them.”

Social media also plays a large roll in the interview process. Although you may think that your account is private, it can easily be accessed by anyone with the proper skill set.

Melvin said that he once knew a girl at the Hays Academy of Hair Design who showed the class that she knew how to access someone’s private account. Melvin said if a student at a school for hair design could do it, imagine how easy it would be for someone who is trained to hack into social media accounts.

The panel said an applicant should walk in with ambition and initiative. You need to be willing to start at the bottom and work your way up.

Along with showing your ambition, Foster said if a job-seeker has a bad attitude, they need to leave it at the door. It is unlikely that an employer will hire someone who has a bad attitude because that demonstrates how you may act during the job itself.

One of the points they stressed greatly was being yourself. “We don’t want to see an actor,” Melvin said. “We want to see the real person.”

This article was written by Allison Hillebrand of HHS Guidon