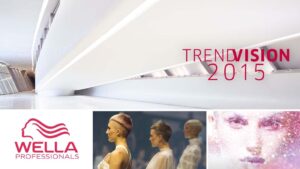 Competition, by definition, is the act or process of trying to get or win something (such as a prize or a higher level of success) that someone else is also trying to get or win. At Hays Academy we encourage students to enter many competitions while they are in school; it is a great way to test your skills and get your name out there in the industry.
Last weekend I had the oppurtunity to assist a graduate, Christina Van Allen, in the 2015 Wella TrendVision Awards in Las Vegas. For me, it was the first big competition I had ever been behind the scenes. I didn’t realize what all went into a huge show such as this one. Saturday was model prep day. We had 4 hours to execute the hair cut and practice the style for the next day. If time allowed 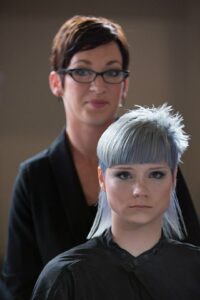 , we could also do make up. As the assistant I was not allowed to cut, I could only hold the hair for Christina. My job was to get her everything she needed, as well as do the make up for her model. After time was up we had a working dinner, and then proceeded to do the show rehearsal. Contestants from all over North America lined up on the sides of the stage with their models USA on one side and Canada on the other. They went through what each person was to do for the show. I watched in awe as the models walked the runway, there was so much talent in one room. Sunday was show day, we arrived at the model prep stations at 12:30, we would have roughly 3 hours (timed) to get the models ready for the show that night, however unlike the day before the judges would be walking around asking each competitor questions, media doing interviews, and lots and of photographers.

This years judges were:

Tabatha Coffey from Bravo’s show Tabatha’s Salon Take Over and Sheer Genuis. Tabatha has been doing hair since she was 17 years old, she has her own salon. Tabatha is a very inspiration person because she is passionate about teaching other perfessionals and helping them become better.
Whitney Port from MTV’s The Hills. She is now the Wella embassitor and has worked for many magazines, including Vouge.
Andy Lecompte was another judge. He is a celebrity stylist and has editorial hairstyles that have been published in Los Angeles.
The heir to the Sassoon throne- Eden Sassoon was also a judge. Eden is the daughter of Vidal Sassoon. She owns two businesses and has a very successful career.
Oscar Blandi has been doing hair since the age of 14. He is orginially from italy and moved here in 1990. He owns his own salon which has about 30 stylists.
Franc Marasco was a judge, he is originally from Canada, owns his own salon as well as has been featured in Beauty Launchpad Magazine.

Needless to say while the judges were walking around you could litterally feel the nervousness from the contestants as well as assistants. These judges are beauty ledgends in the cosmetology world standing there in the same room judging our work. These judges know the industry inside and out, they are an inspiration to most everyone in the cosmetology world. I feel very blessed to have had the oppurtunity to meet them.

Soon show time came and I took my place in the crowd, with two of the Hays Academy owners. I dont think nervous could even begin to describe how we were feeling. The time came for them to annouce the winners of the 2015 Student category; unfortunately we did not win the competition but let me tell you what we did win. We won expierence. Competing and putting something you put your heart and soul on the line for and giving everything you have is good for all of us. If you don’t ever try you will never win.
We won friends. Unless you havent ever done something like this you will never know how much you lean on the other people around you, even though we were competeing with them, we were a team, all of us. We won support. Our cell phone batteries would only last 4 hours because of constant calls, texts, messages, and facebook posts from all of our friends and family.
So, from the bottom of my heart, thank you! Thank you for continuing to support the alumni, students, and staff of Hays Academy. Thank you to Christina for letting me assist you during this amazing journey. Thank you to Wella for absolutely EVERYTHING you did for us! Thank you to the judges for taking you time out of your busy schedules to come and judge us. Most importantly thank you God for blessing us with this amazing expierence.